If you are contacting us for the MEMBERS ONLY password, it's in your Bender kit.

Your form message has been successfully sent.

You have entered the following data:

ABOUT US AND WHO WE ARE 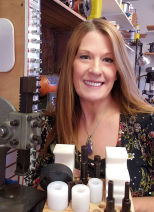 Suzanne is President and founder of Flatwearable Artisan Jewelry Inc.

She has been a hairstylist for 36 years.  She gave it up entirely when she opened the silverware jewelry retail store in West Seneca, NY.

She has always had a creative side, along with an entrepreneur's spirit.

A dear friend was telling her about spoon bracelets and once she saw what they were, she knew she had to make some. Her intention was to only make some for personal use and some for friends and family. She found the bending of the flatware to be quite difficult, especially since she deals with arthritis. She researched long hours to try and find a solution and an easier way. She showed her father, John, a picture of a tool she found on the internet and asked if he would make her one. He did, but it didn't work at all on stainless steel (her first attempts at making bracelets) and it performed very poorly on silver plate.

When John came up with the winning design, she was hooked! Suzanne was bending every spoon and fork she could get her hands on. Before long she had transformed part of her home office into a jewelry studio.  Her jewelry designs have been very popular and the birth of a new business began.

Being an entrepreneur, Suzanne could see the potential in John's spoon bender. They talked about selling a few online to see what would happen. Much to the amazement and delight of both John and Suzanne, the bender was a HUGE hit! They have sold all over the world.

The bender business outgrew her home office/studio and in April 2014 she moved the business.  The internet sales and retail jewelry sales were relocated to 14 Michael Rd. in West Seneca, NY.  In September 2017 the retail store closed so that all of the focus and energy could be put where it was needed the most, internet sales and education for silverware jewelry artists worldwide.

In the late winter of 2018 Suzanne began incorporating traditional silversmithing techniques into her silverware jewelry work and has developed a gorgeous line of unique jewelry that can be purchased online.

In December, 2020, Flatwearable relocated from a very cramped 900 sq ft storefront to their own building which boasts 1800 sq ft of shop and warehouse space and 720 ft for offices.

Suzanne is 54 and lives in Hamburg, NY with her husband Rick and their 3 cats, Zildjian, Bella and Sabian.  She is the mother of 2 grown children. 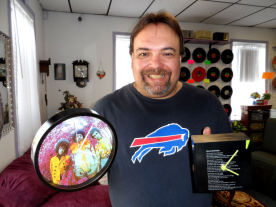 Rick is the Vice President of Flatwearable Artisan Jewelry Inc.

He worked in the bowling industry for over 30 years.  He did everything from mechanic to manger and owner.   He left that field to work full time at Flatwearable.  He's also an accomplished drummer and has played with numerous bands in the Buffalo area.

Rick is the head of the shipping and receiving department at Flatwearable. 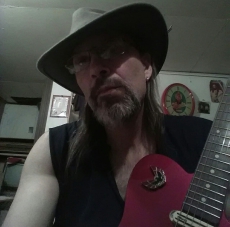 He is an invaluable team member that works behind the scenes packing parts, cutting materials, organizing stock, building kits and a dozen other tasks.  We couldn't do what we do without his support.

John is the inventor of the original Flatwearable Spoon Bracelet & Ring Bender.

John was an electronics engineer by trade and worked for GE until he retired. He became an avid woodworker in his retired years. He was known for his hand crafted woodworking safety tools which were sold online. Health issues over in his later years had taken away much of his energy and desire to create.

When his daughter, Suzanne enlisted his help with the difficult task of bending flatware for making bracelets, John took on the task with enthusiasm. He worked on a current idea, but the product came up short on several levels. Never discouraged, he continued to work on it. He showed it to Suzanne one day and her thoughts were that this odd looking jig would never work. John demonstrated it for her and she was amazed beyond words! It not only worked, it was PERFECT!

Perfect was always a relative term for John. He believed there is always room for improvement. During the time he was making the bender, it went though some design changes and tweeks. John continued to learn new things about the bender on a regular basis. He'd also developed more efficient ways of building it... all the way to the 6G bender.

John couldn't keep up with the orders, so in November 2013 the bender manufacturing was taken over by a family company which is located in Syracuse, NY.

John passed away June 17, 2015, at the age of 84.  He is greatly missed and his legacy will live on through his family and those that enjoy the fruits of his invention.

Where to Find Us: